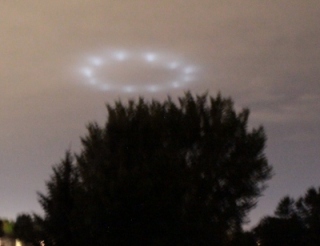 To this day, I still don’t know what we saw all those years ago. I am absolutely positive it was neither man-made or a natural phenomena. Maybe you can tell me what eight normal rational human beings saw that night.

It was around the end of summer 1978 here in New Zealand. Together with a group of friends, I spent an extremely pleasant evening observing the heavens using the eight-inch telescope I had at the time. After about four hours observation we decided to spend some time laying back and seeing how many shooting stars and satellites we could spot for an hour or so.

The night was one out of the box. As anyone who is interested in astronomy will tell you, there are only a finite number of nights (approximately twenty-five) during the year that reach anywhere near optimum in ‘seeing conditions’. In other words I’m talking about near perfect conditions, no moon, no haze, no clouds, no fog – nothing. The only way to better the ‘seeing’ would be to piggyback aboard the Hubble scope!

We took a large groundsheet and spread it on the lawn so we would be comfortable, laying head to head to cover all the visibly night sky from our position. After about fifteen to twenty minutes, a couple of shooting stars were spotted entering the atmosphere from a northerly direction. After a little while, we saw the first of four satellites enter stage from the northwest and exit via the southeast. Later the second one scribed a path from the north-northwest to the south-southwest. A third came in from almost due east and disappeared immediately overhead to the west as it re-entered the earth’s shadow. The fourth made its debut almost simultaneously with the third but from the southwest exiting from our view to the northeast. All this happened over a period of approximately an hour and a half to be repeated again at roughly eighty-minute intervals. We didn’t see any more shooting stars nor did we see any aircraft. At the time in New Zealand, the number of commercial aircraft was much smaller than present day. The local airport only operated during the hours of daylight.

The next thing we witnessed was awe-inspiring! It was getting on for 12.30-12.45am when it happened. A perfect circle of white lights appeared directly above us, hung there for what seemed an eternity, but in reality was only a matter of a minute or two before it took off vertically at breathtaking speed and disappeared from view! Our immediate reaction was meteor shower, but meteors don’t climb, they fall through or bounce off our atmosphere. We were so excited by the phenomena we’d just witnessed that we spent a long time trying to figure out exactly what it was we’d seen.

The circle of lights were stationary, by that I mean it didn’t spin in a circular motion. The number of lights in the circle was approximately ten to twelve. The space in the centre of the lights was black. In other words, no light was visible from the stars above it. It made no sound whatsoever. It was approximately a hand span in width holding your arm out at full stretch. Estimated altitude was in doubt, anywhere from one hundred to five hundred feet. At that time of year the Orion constellation together with the Southern Cross and the Beehive are the dominant night sky features against the Milky Way. Other objects like dark gas clouds can also be observed so that to an experienced observer one more piece of blackness in a patchwork of lights would not necessarily be out of the ordinary. And if something wanted to hide what better place than directly below a gas cloud, where its telltale shape would go unobserved. How long it had been there we couldn’t guess. Why it was there or what it was we didn’t know. But one thing we definitely did know was we had all seen it! We also agreed it wasn’t man-made or natural. The other thing we were adamant about was that we would never talk about it again to each other or mention it officially at the time. You have to remember that back then anyone who reported something of this nature was considered a candidate for the nut house.

Until that night, I’d been sceptical about so-called UFO’s I still am to some extent. What we saw that beautiful summer night all those years ago I’d never forget as long as I live. After the event, we all went our separate ways and have never to this day, kept in contact. I don’t know if any of the group are still living locally, I can’t remember their names or the exact date we saw it. But one thing I do remember very clearly, and I’m sure the others of the group will if they read this account, is that we all saw the circle!

One final note. I carry a small piece of scrap brass in my wallet. On it, I inscribed what I saw that night, the circle superimposed over the Orion constellation with the Beehive and the Southern Cross. On the back are the words Jack Eason-Third planet-System Sol. Don’t ask me why I did it; I just felt I had to…