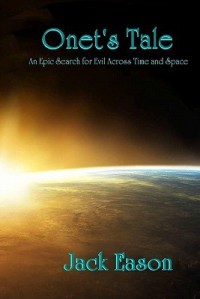 Back in 2010, before I saw the light and became an Indie, my first officially published book Onet’s Tale – a Science Fiction Space Opera, appeared courtesy of a small press based in the USA. At the time I was over the moon that one of my works was finally available via Amazon in both Kindle and Paperback versions. Back then, like a lot of writers new to the game, I seriously thought, “At last, I am finally on my way!”

Sadly the book is no longer available even though it still features on Amazon. Why? Because inevitably the time came when the chief editor who is also the senior partner in the company and I fell out. From my point of view it was all about his company’s lack of advertising. I suspect that from his, it was that I flatly refused to doff my metaphoric cap in his presence, and be grateful for whatever crumbs he deigned to give me.

To cut a long story short, part of the contract termination deal dictated by him was that Onet’s Tale would no longer be available for purchase.

Now you know why I became an ‘Indie’.

For any of you Science fiction addicts out there who would like to read it for free, leave me a message here, not forgetting to include your email address and I will send it to you in .PDF form.

Should it have become a best seller? I’ll leave that for you to judge…

PS – Chris Graham aka The Story Reading Ape is currently reading his copy.  😉

PPS – I’m currently reading through it for the first time since it was published in 2010, I simply cannot believe the number of ‘editing errors’ that my former editor failed to note before allowing it to be published. So much for his assertion that he was/is a professional editor – Hey ho…

Yulia has been set free at long last…

LKWatts Confessions: It’s Normal Not to Sell a Lot of Books.

At last, I’ve been waiting for someone else to agree with me on the subject of book sales.

One woman’s introduction to the world of Self Publishing.

I thoroughly enjoyed reading this article…

A couple of days ago a person who took the cowards way out by using a nom de plume when commenting on a particular blog post of mine, seemed to take great delight in pointing out the fact that I had made one spelling mistake. As it turns out I hadn’t…

At the time I thought big deal – take me outside and shoot me! So I missed one while I was editing the post, so what?

When I accused him of being pedantory in the particular blog post’s comments, he was quick to deny that he is a pedant, by saying that “Not pedantic at all. You mentioned you revised this post dozens of times yet the misspelled word is early in the post. I felt bad for you since we, as editors, have all been there. It is hard to proofread your own work. This example points out why that is so. If I came across as snarky in any way that certainly wasn’t my intention. My apologies for the misunderstanding”. At the time I fully accepted his apology, prepared to forgive and move on. But like all of his ilk he could not simply leave it at that. Had he done so, I would not now be writing this post.

Instead he saw fit to repeat it in so many words below the link for the particular blog post in a Facebook writer’s group to which I contribute, this time using his own name, thereby making his condescending comment a matter of public record.

Therefore I can repeat what he said verbatim for the great majority of those who follow my blog and do not feel the need, unlike him, to feel superior :- “The article shares some good thoughts. I did giggle when he said he revised the post three dozen times – three or four sentences in he misspells “practices” and uses “practises”. I feel bad for him because we’ve all been there. It’s hard to proofread your own work.”

Perhaps he will take the time to think first before he feels the need to make any further comments of this nature in the future. After all most hardworking writers do not appreciate being attacked by smart mouthed clever dicks.

I would remind him and all other pedants who feel that they are somehow a cut above the average writer of the following quote by Alexander Pope  – To err is human, to forgive divine…

PS – thinking about it, I checked the spelling in my English version of the OED. Guess what, as an Englishman, I was perfectly correct in my spelling. Practices is the US version!!!

At the moment I’m working on Chapter Two, in which we find out more about the early years of my heroine pictured above – Persephone Witchclaw.

” From her sixth summer until her fifteenth, she led an idyllic life. For many summers she could never bring herself to speak about Crellan. She returned the love showered upon her by her adoptive Humin parents Alene and Caerwyn Witchclaw tenfold. She had never been as happy as she was here in the village. The greatest delight for her was when she and her mother spent time together each summer, gathering berries on the edge of the woods that surrounded the village, spending endless hours gossiping. Equally she loved to help her father make hunting bows and arrows. Caerwyn quickly appreciated that his daughter was naturally gifted. So he taught her the arts of fletching and flint knapping. She soon gained a reputation for producing the finest arrows.

First she selected the best willow wands for the shafts. Next she made the nock out of a mixture of beeswax and pine resin which quickly hardened once she had fixed it to one end of the shaft. She then fletched the arrow with a mix of carefully selected Swan, Goose and Duck feathers held on by twine made from the tough hair from along the spine of a Boar’s back. She soaked the twine in hot beeswax before carefully winding it through the feathers and around the shaft below the nock. Finally she split the other end of the shaft before inserting a flint arrowhead into it, and once again, she secured it into place using more of the beeswax soaked Boar twine. Young Persephone’s arrows soon became much sought after by every hunter and warrior throughout Goblindom, no matter whether they were Goblin, Humin, or Elf.”

As an author, it wasn’t until I took up writing seriously back in 1995 that I finally appreciated just how many of today’s books are the end product of lazy writing practises. A classic example is the endless use of things like, ‘he said’ or ‘she said’ when your characters are speaking. This is perfectly acceptable when writing the initial draft of your book. But never ever let them endlessly appear in the final draft. Once you have been picked up on it and other examples of literary lazyness by your harshest critics (your readers), until you mend your ways and the use of tools like your Dictionary and Thesaurus becomes second nature, don’t be surprised at the loss of your potential readership. The harsh reality of the writing world is that readers either make or break you! If one person likes your work, they will soon tell their friends, particularly these days with Social Media Sites like FaceBook and Twitter. By the same token. the opposite will apply if the end product of your work is unmitigated rubbish, chock full of errors!

Up until I began writing, the concept of ‘Lazy Writing’ hadn’t even entered my mind. Back then, like millions of other readers, the only thing that mattered to me was whether or not the story grabbed my attention. Some authors, be they ‘Indie’ or ‘Establishment’ are equally guilty when it comes to literary laziness, the same can be said for some editors. In all three cases, there is no acceptable excuse.  Another glaring example of the sheer lazyness prevelant in today’s literature is the endless repetetion of certain words, along with foul language. While the above may be socially acceptable when talking with family and friends, if you are a writer, it certainly isn’t!

Regarding foul language and poor writing practices, E.L. James’ Fifty Shades of Grey is the classic example. While it may appeal to a certain base section of the world’s population who know no better, to anyone who holds the written word dear as I do, it is anathema.  Despite the fact that the book has become a best seller and is soon to become a movie, it will never be held up as a shining example of ‘best writing practice’ by any literary critic or scholar worth their salt.

Lastly, as a writer, you must be your own harshest critic as well as being an extremely tough editor. If you are wondering why your books simply don’t appeal, take a long hard look at your final draft. I’m betting that it is full of glaring literary error’s.

PS – If you are wondering how many times I edited/rewrote this post, it was well over three dozen before I finally hit the Publish button…