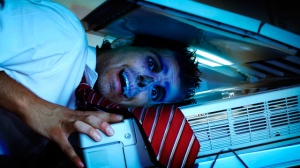 Is it just me or have the rest of you noticed the disturbing increase in the number of thoroughly nasty individuals appearing on all social media sites lately?

If like myself you have the effrontary to raise your head above the parapet, by that I mean, advertise the fact that you are an active writer, by advertising your work or even supplying the link to blog posts like this one on any social media site, inevitably you will be attacked by someone who simply loves to hate. Sounds completely crazy I know, but we’re not talking about normal people here, instead I refer to the totally unhinged, common or garden, lesser spotted internet troll.

These days as a writer you fully expect it to happen sooner or later whenever a book you have written is published, especially by those who make it their personal business to pounce and attack from the shadows on major book sites such as Amazon or Goodreads.

Bizarrely, if you are not being publically derided by people like them, it usually means that your book isn’t being bought. Once the trolls find you, never ever enter into dialogue with any of them, no matter how sorely tempted you are. Just ignore the crettins! The thing to remember with trolls is that were you to physically confront them in the street, they would soon slink away, because without exception they are all cowards.

Occasionally one seemingly normal individual will appear, wanting to befriend you by employing the ruse that you share internet friends in common on a major social media site like Facebook. Normally those I keep in constant contact with on a daily basis, apart from my close personal friends and my distant cousins, are fellow writers. I’ve lost count of the number of times I’ve been forced to ‘unfriend’ a non writer, the minute they show their true colours by making the mistake of either attacking me, or far worse in my eyes, attacking one of my writing colleagues. I had to unfriend someone recently, when the person concerned turned on me totally out of the blue while we were ‘chatting’. I don’t know about the rest of you, but I have absolutely no time whatsoever for nasty individuals like that.

Recently a few cretins, (sadly one of their number is known to me) have begun attacking a lovely lady and fellow writer I’m proud to call my friend on Facebook. As a successful writer, I feel it is incumbent upon me to stand up for her and all of my fellow writers when they are being publically attacked on social media, even though many of my colleagues won’t, for fear of being targeted themselves.

So my message to all of you is to be extremely wary when someone wants to befriend you from now on. This is the latest tactic being employed by the Internet Troll – first befriend, then destroy!!! If you are the least bit unsure about it, either decline the request, or failing that, ask the friends you supposedly share in common about them first. If they are the least bit concerned, don’t befriend the individual. Better safe than sorry. It’s that simple. In the past I’ve always tended to give the benefit of the doubt to anyone who wants to add me to their number of internet friends. No more!

Meantime, I invite you all to voice your views on the subject by leaving a comment below this post.