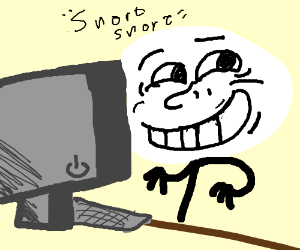 …certain individuals don’t like plain speaking, preferring to bury their heads in the sand.

One current ugly stumbling block for all writers these days to be ignored at all costs is the average inbred moron seated at his/her computer who deludes him/herself into believing that what he/she says on a public book based forum, actually matters. His/her kind set themselves up as self-styled critics, typically wittering on endlessly about subjects such as non-American spelling and grammar in books written by anyone living beyond the borders of the US for instance. Thereby clearly demonstrating their ignorance of the English language to the world at large. The aforementioned description while general, nevertheless fits the individuals currently responsible for the majority of one, two and three star reviews for any book you care to name on Amazon, to the detriment of the genuine reviewer.

Not one of them has ever written a book in their entire lives, let alone had one published, and yet they feel it is their bounden duty to harshly criticise, especially when it comes to newbies, no matter whether or not they are self-publishers or mainstream. There are also a few unscrupulous individuals who see absolutely nothing wrong in adding a link to their review of your book, to advertise their own efforts – extremely bad form!

Like most writers these days, I simply fail to understand why Amazon seemingly encourages and condones what amounts to nothing more than often vicious attacks. As a writer, for the sake of your sanity take my advice and never read the reviews. Above all refrain from entering the forums, no matter how indignant you may feel.

As a successful writer I see far more pressing issues in a lot of what today’s eBooks have to offer. The main one often being the new writer’s poor choice of genre. A lot simply jump on the bandwagon hoping to cash in on what is portrayed as popular by various advertising campaigns by publishers and so-called professional editors and book touts, such as the current trend in nauseating vampire and zombie based stories and what can only be described as badly written pornography (think Fifty Shades of Grey). While it is true to say that largely these genres appeal to the uneducated, those who write more thought provoking novels are left by the wayside, struggling to survive.

Some writers become convinced that niche markets is the way to go, which in reality means the product of their efforts will barely sell in the dozens rather than the thousands.

Face it people, the only book that will sell in its thousands is the one whose subject matter initially provokes curiosity in the mind of the often fickle reader. A growing number of writers cling desperately to the belief that by writing in a largely unpopular genre, the product of their toil will be noticed. How many times recently have I seen writers desperate to sell their wares, spend money time and effort to change a cover for instance and to produce actual paperback copies, which they then hawk around the many small time book fairs, largely at their own expense? In the end none of the aforesaid will make a damned bit of difference if your favourite genre is currently out of fashion. To my mind this kind of thinking is nothing more than an example of self induced vanity press. In other words spending money you can ill afford.

Just remember this – if you have to shell out good money after bad to get your manuscript edited by a so-called professional, you have to recover that cost as well as the cost of the cover and printing before you are in profit – something which a lot of modern day writers ignore at their peril… Remember this too – if a book fails to sell in the traditional publishing world it is remaindered (pulped) and a line is drawn under your name with the words DO NOT ACCEPT ANYTHING FURTHER FROM THIS AUTHOR! Traditional publishing’s business model is to make money not lose it. It should be yours too!!!

Next comes the biggest stumbling block for a lot of writers – editing and proof reading. Many Indies pay someone to edit for them (another cost to be taken into account). However, using the ‘look inside’ feature available on Amazon, it would appear that many mainstream editors let alone self-published writers simply fail to use a Spell checker, common to all writing software packages. The same goes for the humble Grammar checker – patently ignored by the majority. How many even use the Look up or Synonym features, accessed simply by right clicking over a word? Not many it would appear…

We now arrive at colloquial language and writing in the first person. Many fall into the trap of using colloquial language when two characters are conversing within the context of a story – bad idea! The other big no-no is to write in the first person. It is not easy to do. The use of first person is chock full of pitfalls for the unsuspecting. Avoid using it if you can. Loathsome as it may be, even third person is preferable.

Finally remember this simple fact – the product of all your hard work is just one among millions currently available for sale. If its content doesn’t stand out, especially these days where people prefer to wait until in sheer desparation you buckle under and offer it for free! Even then there is no guarantee it will be read. Inevitably after three or four weeks it is consigned to the literary equivalent of the Bermuda Triangle for ever more by the publisher; the way books disappear from the top 100 on Amazon is a prime example! No amount of cover changes, giveaways and signed copies in an internet contest will increase its chances of becoming a best seller one iota…

Just imagine, you have all of the above to look forward to. Do you still want to publish that book?

16 thoughts on “My message may be unpalatable to some…”