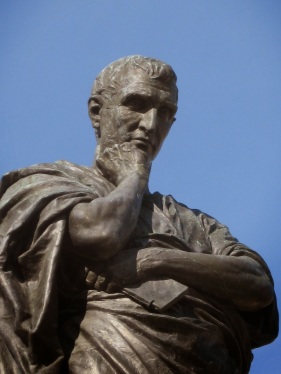 Many consider Publius Ovidius Naso (Ovid) to be a literary genius, and continue to do so even now in the twenty-first century. Having read his Poems of Exile, I came away with the feeling that his was a childlike approach to writing. Hardly the pen of a competent adult writer. Judge for yourself:

For you no purple slip-case (that’s a colour 5 goes ill with grief), no title-line picked out in vermilion, no cedar-oiled backing, no white bosses to set off those black edges: leave luckier books to be dressed with such trimmings: never forget my sad estate. 10 No smoothing off your ends with friable pumice — appear for inspection bristly, unkempt. And don’t be embarrassed by blots. Anyone who sees them will sense they were due to my tears.c

Reading Ovid you begin to wonder about his state of mind. Or at least I do. Reading his poems there is no sign of him being a literary genius despite what is said about him. There is bitterness at being banished to Tomis on the Black Sea by the then Roman Emperor Augustus if you read between the lines.

Give me Carravaggio every time!

By the way, I haven’t completely dismissed the idea of writing a novel based on him…

6 thoughts on “Talent versus the overrated amateur”