At the moment I’m working on Chapter Two, in which we find out more about the early years of my heroine pictured above – Persephone Witchclaw.

” From her sixth summer until her fifteenth, she led an idyllic life. For many summers she could never bring herself to speak about Crellan. She returned the love showered upon her by her adoptive Humin parents Alene and Caerwyn Witchclaw tenfold. She had never been as happy as she was here in the village. The greatest delight for her was when she and her mother spent time together each summer, gathering berries on the edge of the woods that surrounded the village, spending endless hours gossiping. Equally she loved to help her father make hunting bows and arrows. Caerwyn quickly appreciated that his daughter was naturally gifted. So he taught her the arts of fletching and flint knapping. She soon gained a reputation for producing the finest arrows.

First she selected the best willow wands for the shafts. Next she made the nock out of a mixture of beeswax and pine resin which quickly hardened once she had fixed it to one end of the shaft. She then fletched the arrow with a mix of carefully selected Swan, Goose and Duck feathers held on by twine made from the tough hair from along the spine of a Boar’s back. She soaked the twine in hot beeswax before carefully winding it through the feathers and around the shaft below the nock. Finally she split the other end of the shaft before inserting a flint arrowhead into it, and once again, she secured it into place using more of the beeswax soaked Boar twine. Young Persephone’s arrows soon became much sought after by every hunter and warrior throughout Goblindom, no matter whether they were Goblin, Humin, or Elf.” 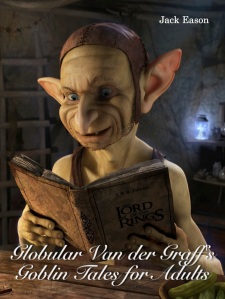 Here is a reminder of some of the characters, along with the back story as it stands at the moment:-

Glob and co usually add an s to most words, such as likes for instance. To give you another example, they use I’s instead of I.

They all wear felt jerkins, kerchiefs and willow-bark boots. In winter they wrap spider web mufflers around their necks to keep out the cold, and wear squirrel fur mittens.

The lads prize willow-wand above all other types of timber. They use it for things like crutches for example. They use hazel twigs as tooth picks. They all love acorn cake. They use honey as a salve, and dried sphagnum moss as an antiseptic bandage. Their favourite foods are: dried toadstool, dried mushroom, dried fish, wild onion, mint, honeycomb and Neo’s mead.

They always refer to the youthful as youngers, or yung.

Glob is the oldest of the Goblins and their leader. He has an ash staff tipped with a magic Emerald to summon Yathle the Wyvern. He loves to read ancient chronicles.

Byz – simple minded, is apt to wander off if not tethered. He plays reed pipes. He loves playing with spiders, snails, worms etc.

Mous is the accident prone one. He always substitutes z for s. He is prone to sulking. He often has bitter arguments with his best friend Make.

Neo – severely cross eyed, is extremely bad tempered. He love’s Mica’s old mare Miranda. He makes an excellent mead and is responsible for manufacturing their willow bark boots, sewing them together using a bodkin, and thread made from the best spider silk.

Make – Pipe smoker, is portly. He is normally content with his lot. He loves honeysuckle flavoured tobacco. His most prized possession is what he always refers to as his bestest briar pipe. Despite regarding him as his best friend he often accuses Mous of stealing his possessions.

The elderly goblin Grimefleet Binglenook, Bingle to his friends, was the last survivor of the fight for domination over the hidden land of Goblindom by the Black wizard Crellan and his mighty army of minions, against the forces for good. Knowing that his time was short, Bingle wrote a history of the battle, with particular attention given to one outstanding individual who united the many squabbling tribes of Goblins and Elves. The book became recognised throughout Goblindom as the definitive history of the battle of Blaxhorn.

The Black wizard Crellan commanded a formidable army of Minotaurs, Trolls, Black Dragons, Ogres, Griffins, Black witches and wizards, against the many tribes of Goblins, Elves and Humins (the peaceful predecessors of the hated Humans) aided by White witches and wizards and the goblin’s Wyvern allies, led by the formidable Yathle.

Bingle’s ancient oak tree home, not far from Bringweed Common, stands to the south of the valley in the Southern Woods where his great friend Globular Van der Graff lives with his four brothers. One of them is Neopol Stranglethigh, known as Neo. Extremely cross-eyed and with a foul temper, as a callow youth of barely five hundred summers, he was heading for trouble before being taken in hand by Bingle. Neo loves the old goblin dearly, looking upon him not only as his teacher, but also as his best friend.

Bingle was as deaf as a post, bad tempered and had become almost blind by the time he began schooling his charge. He used a carved snail shell as an ear-trumpet. If you saw him on the path between his home and the Humin village where Glob’s friend Mica, his beautiful wife Agnitha, and their equally beautiful daughter Ylesse live, he would clearly stand out from any other goblin as he still wore the traditional sombre brown clothing common among all goblins during the time before, unlike goblins of today who wear felt jerkins, kerchiefs and willow-bark boots.

Roughly a week after he had finished writing the tome, he and his symbiotic oak had just celebrated two thousand summers together when Bingle became seriously ill as his home began to die. All goblins live for the same length of time as the oak trees they reside in. Glob’s feathered friend Bejuss, the one eyed lisping raven with the twisted beak had been perched on Bingle’s windowsill passing the time of day and delivering the latest gossip when suddenly the ancient goblin collapsed on the floor of his home. Bejuss flew first to the Humin village to find Mica, before heading home to tell Glob, and above all, Neo. 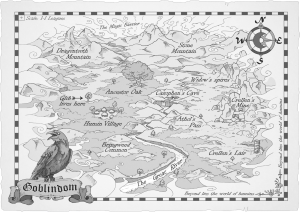