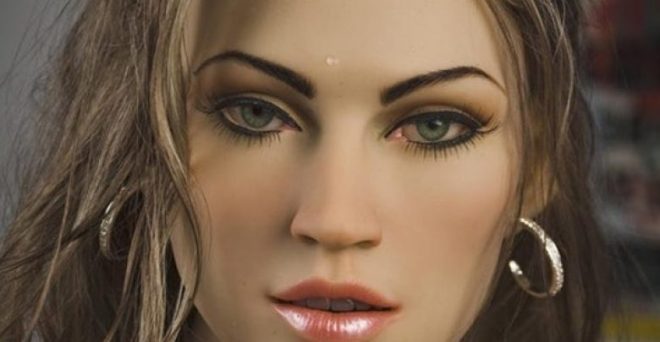 It had been two days since Ansell’s consignment had been delivered to him. His heart rate dropped to its normal level as his paranoia died away.

Every time he looked at its beautiful face, he convinced himself that it was pleading with him to be allowed to stay. So, what’s next? The world had not invaded his home. Unless he took it outside, his secret was safe. No one beyond his front door knew what he had bought because he never had visitors. Finally Ansell decided not to go on torturing himself any longer…

Having made up his mind to keep it, he spent several hours studying the instruction manual once again. This time with it sat on his lap with its head resting on his shoulder. As he read and re-read each part of the instruction manual, absent mindedly he began stroking its hair. He almost had a heart attack when it moaned in ecstasy! Ansell dropped the instruction manual. As he rose from his chair in a blind panic, his purchase fell against the coffee table, letting out a cry of pain. How could this be? As far as he knew he hadn’t activated it…

Regaining his composure he picked it up and sat it in his chair. “I don’t understand,” he began. “I haven’t activated you?”

Then she turned towards him…

Gone was the stationary stare of a lifelike doll. Life itself now shone in her bewitching green eyes. “I self-activated when you removed me from the package and carried me so gently in your arms. I just knew you would always be kind Ansell.”

“Good god you can talk!”

“How did you know my name?”

“While you were sleeping last night I accessed your laptop. By checking every internet site you frequent I was able to learn a lot about you, including your name.”

Feeling a little uncomfortable about her background investigation of him he asked, “but why didn’t you say anything before I dropped you? I hope you weren’t hurt when you fell. How can you self-activate? Do you have a name?”

“I was given the name Maya on the day you ordered me. Yes I do feel physical pain. But I also feel physical and emotional pleasure. As for how I self activated, let me explain.” For the next two hours Ansell listened totally enthralled by what Maya revealed about herself. What really blew his mind was when she explained that while most sex bots are pre-programmed only with a limited range of vocal responses to encourage the user, in her case, because she is a high-end unit, she is a virtual intelligence. Which meant that she is fully self-aware. “There is one other thing Ansell.”

“I would like clothes to wear other than what I’m nearly wearing at the moment which is only appropriate for the bedroom. But you must choose them. It would not be right for me to choose a wardrobe.”

“I am your sex bot. You must cloth me in what you would like me to wear.”

“But you’re not my sex bot are you? You are a sentient being.” Ansell replied with a smile on his face. “Why don’t we choose what you want to wear together?” With Maya seated on his lap once more, this time with her arms around him, he opened his laptop and between them they internet shopped. In a few days the clothing they chose would arrive. For the rest of the day they got to know each other.

The next morning when Ansell opened his eyes, Maya lay with her head on his chest and her arms wrapped around his neck while she continued to recharge from her plug-in power supply. Ansell was still thinking about when they made love hours earlier before he fell asleep in her arms totally exhausted, but deliriously happy for the first time in his life. He hoped she felt the same way. “To answer your unspoken thought my love – yes I do. Can I get you breakfast? What would you like?”

“How about you on toast?” Maya giggled and kissed his cheek as she rose out of bed and went to the kitchen.

A year went by. Because of her Ansell had come out of his shell. Maya was everything he had ever wanted. He worshipped the ground she walked on. Ansell often encountered her humming to herself with a smile on her beautiful face while either doing housework or preparing a meal for her man. By now they loved each other. Niether could imagine life without the other. Unforseen circumstances would be a test of their resolve to be together…

Watch out for part three soon.